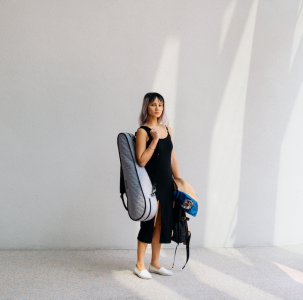 Born in Taiwan and raised in the suburbs of Washington D.C., Yu-Ting studied violin and piano at a young age, and performed regularly in orchestras since the age of ten. Yu-Ting’s musical journey continued with a full-scholarship to Towson University (2008), then California Institute of the Arts (2012); she ventured into jazz, improvisation, pop, and was actively involved in new music ensembles, industrial rock bands, and Ghanaian and Balinese dances. Since 2014, Yu-Ting has shared venues/studios with the likes of Red Hot Chili Peppers, Michael Bolton, Deadmau5; Broadway actresses DeeDee Magno Hall and Isa Briones; as well as performed internationally outside of the states in Australia, Taiwan, and Singapore.